Take in Alaska’s best breweries on an epic road trip from Fairbanks to Homer. Along the way you’ll also enjoy some of the state’s most iconic activities, from fishing the Kenai River to strolling the Homer Spit and an optional side trip for bear viewing (and beer drinking) on Kodiak Island.

Arrive in Fairbanks, rent a car or RV, and drive 10 miles north along the Steese Highway to Silver Gulch Brewery, the northernmost brewery in the United States and a great place to grab a late lunch. Or, explore other local breweries right in town including Hoodoo Brewing Company, Lat 65 Brewing Co., or Black Spruce Brewing Company.

Next, make the two-hour drive south on the Parks Highway to the tiny community of Healy, which is just 10 miles north of the entrance to Denali National Park and Preserve. Stop in for dinner and a tasting at the 49th State Brewing Company — the one brewery that rules them all near Denali — and spend the night at one of the local accommodations.

From Healy, drive south on the Parks Highway for three hours to the notoriously quirky town of Talkeetna. Just how quirky is Talkeetna? The locals elected an orange cat named Stubbs to be the mayor, and many still insist this small climbing, fishing, and mining town was the inspiration for the Alaska-themed TV show Northern Exposure. Don’t miss a chance to people-watch from the outdoor deck at Denali Brewing Company’s Twister Creek Restaurant, which sits right on Main Street.

Take at least an hour to browse the wonderful gift shops up and down Main Street before you hop back in your car and drive another hour and a half south to the farming community of Palmer, where you can catch a tour and tasting at one of the local brewing companies including Arkose Brewery, Bleeding Heart Brewery, and Matanuska Brewing Company before finding accommodations for the night.

Alaska’s big city, Anchorage, is about 45 minutes south of Palmer and positively booms with breweries and brewpubs, such as Broken Tooth Brewing served at the popular Bear Tooth and Moose’s Tooth restaurants, Cynosure Brewing, Double Shovel Cider Company, King Street Brewing Company, Anchorage Brewing Company, Turnagain Brewing Company, Midnight Sun Brewing Company, and Glacier Brewhouse, just to name a few. (Brewpubs can serve their own food but breweries cannot; however, you can bring your own food with you to the breweries, and sometimes they station food trucks out in the parking lot.) While you’re waiting for your brew destination of choice to open, consider stopping by one of Anchorage’s museums or cultural centers, or hiking one of the popular trails in nearby Chugach State Park.

Take a beautiful drive south from Anchorage on the scenic, coastal Seward Highway. Your destination is the Kenai Peninsula, where fishing and wildlife viewing reign supreme. Take a slight detour 40 miles south of Anchorage to the resort town of Girdwood, where you’ll find the Girdwood Brewing Company serving up craft brews and kombucha.

Make your next stop in either Kenai or Soldotna, where you can sample an impressive collection of seasonal and year-round beers in one of the local breweries: St. Elias Brewing Company and Kenai River Brewing Company. As long as you’re here, cast a line for sockeye or king salmon in the aquamarine waters of the Kenai River, Alaska’s most fabled freshwater fishery, or book a scenic float trip and look for wildlife on the shore. Spend the night in one of Kenai or Soldotna’s many wonderful bed and breakfasts.

An hour and a half south of Soldotna, at the literal end of the road, is Homer. Not only is this town rightfully famous for its art, fishing, and food, it’s also home to Grace Ridge Brewing, Homer Brewing Company, and Bear Creek Winery. Tour the brewery of your choice, then wander the legendary Homer Spit, a 4-mile finger of land that stretches into Kachemak Bay and is lined with some of the state’s best gift shops and restaurants. This is also a fine place to enjoy a sea kayaking adventure or stroll a sandy beach before turning in for the night. Tomorrow, you’ll make the five-hour drive back to Anchorage to turn in your rental vehicle and catch your flight home.

If you have an extra day to spare, hop a small commercial flight from Homer to the nearby island of Kodiak, where you can sample beer from Kodiak Island Brewing Co. and enjoy a day of brown bear viewing in Alaska’s Southwest region. (You can also take the Alaska state ferry from Homer to Kodiak, but it’s a 10-hour ride each way. Be sure to reserve your ferry reservation in advance as schedules are subject to change.)

If you have two days to spare, consider taking a side trip on the drive back to Anchorage: Turn east at Soldotna and, two hours later, you’ll arrive in the small seaside town of Seward. This is a popular cruise ship port on Resurrection Bay home to Seward Brewing Company and Stoney Creek Brew House. Spend the night here, then enjoy a morning whale watching cruise or day hike in Kenai Fjords National Park before completing the last two-and-a-half hours of driving back to Anchorage.

Finally, wherever you roam in your quest for Alaska’s finest beer, be sure to enlist a designated driver or take one of the local taxis. Many of the state’s breweries serve up handcrafted root beers and cream sodas for the non-drinkers in your traveling party. 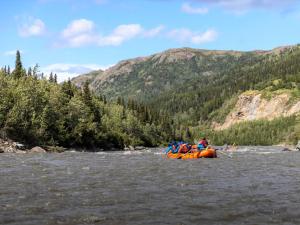 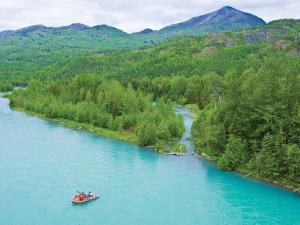 6 Things to Do in Soldotna

Set on the Kenai Peninsula, Soldotna is paradise for anglers seeking trophy salmon and halibut. And when you’re not casting, the town offers an abundance of year-round Alaska vacation fun, from… 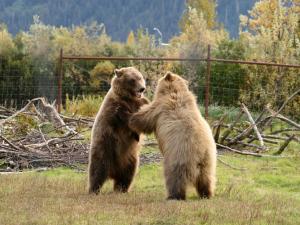