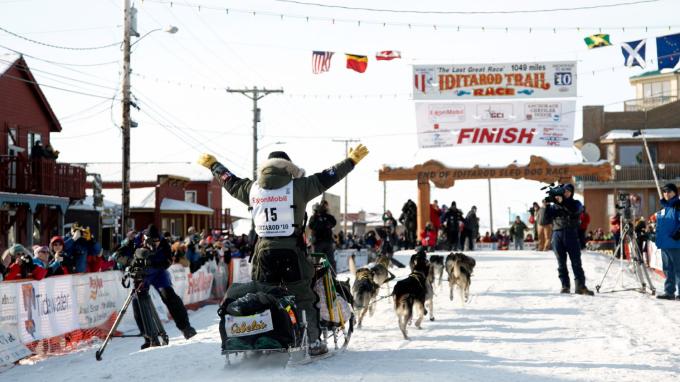 One of Alaska’s most famous events, the nearly 1,000-mile Iditarod Sled Dog Race begins the first Saturday in March with a ceremonial start in Anchorage and an official start the next day in Willow. The event ends in Nome about a week later as the mushers begin to cross the finish line.

If you’re Anchorage the first weekend in March, you can catch the ceremonial start of the Iditarod as mushers and a selection of lucky “Iditariders” wind their way through Anchorage’s downtown streets on dog sleds. Join thousands of spectators as you cheer on the teams of canine athletes and mushers from downtown and various locations along the route in town. To catch sight of the official start of the race, head north to the town of Willow the next day.

You can watch teams cross the finish line about a week later in the western Arctic community of Nome. During the finish of the race, Nome’s population grows by approximately 1,000 people waiting for finishers to arrive. Visitors can meet some of the biggest names in the dog mushing industry while keeping an eye out for dog teams and their mushers rolling into town.