A Local's Guide To Fishing On The Kenai Peninsula

Hobo Jim has performed his "Alaska Show" throughout the state of Alaska and has gathered a multitude of fans for his humorous songs about his occupations and wilderness lifestyle. Jim has recorded seven albums and has performed with many well-known artists such as Reba McEntire, Ricky Nelson, and Randy Travis. In 1994, he was named Alaska's official "state balladeer" by the Alaska Legislature and received a Doctorate in Fine Arts from the University of Alaska Fairbanks in 2018. He passed away in October 2021, but his songs and passion for Alaska will be cherished forever.

I have traveled around the state and enjoyed every minute of it, but nothing causes my heart to race more than feeling a jerk on the end of my fishing rod, and yelling the words, "Fish on!" For some of the best fishing in the world, I head straight to the home of the "Monster Kings," the Kenai Peninsula.

If you're looking for a pro to show you the ways of the river, Krog's Kamp is one of many places to turn. Located near Soldotna, the camp's experienced fishing guides ensure a thrilling experience and old-fashioned Alaska hospitality.

When I'm looking for a more private escape, I rent one of the beautiful, secluded log cabins at Orca Lodge. The lodge's fishing guides will put you into action with enormous king salmon, feisty rainbows, Dolly Varden, line-stripping sockeye and silver salmon. Or, if you prefer a more scenic adventure, take one of the lodge's floatplane or rafting trips to do some whale watching or bear viewing. In the evening, savor the taste of barbecued salmon and exchange your wisest fish tales with other guests around the crackle of the campfire. Or relax in a soothing hot tub, listening to the sounds of songbirds and wind-blown birches.

For a great piece of Kenai Peninsula history that never gets old, I take a drive out to the historic village of Kenai. At Fort Kenai, step inside authentic buildings used by the U.S. Military in 1867 or the Russian Orthodox Church built in 1846. Just down the road at the visitor's center (11471 Kenai Spur Hwy.), walk right up to the world record king salmon weighing 97 pounds, or see the fantastic historical collection and exhibits by local artists. I never leave Kenai without joining the crowd peering over the bluff to watch anglers at the river's mouth. If you're lucky, you can even catch a glimpse of a whale or two. But as soon as a few fish are caught below, the crowd quickly clears out; it's time to get back out there!

Learn more about the Kenai Peninsula >> 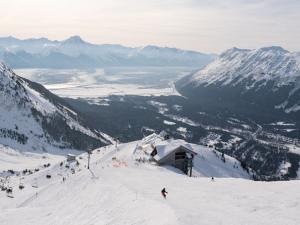 Touring Southcentral Alaska during the winter has never been easier. In this fun six-day driving itinerary, outdoor adventure meets wildlife viewing, winter fishing, and maybe even a few glimpses of… 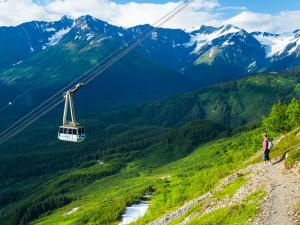 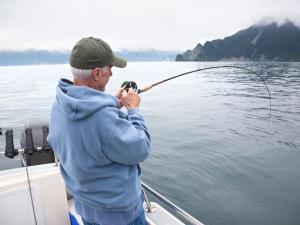